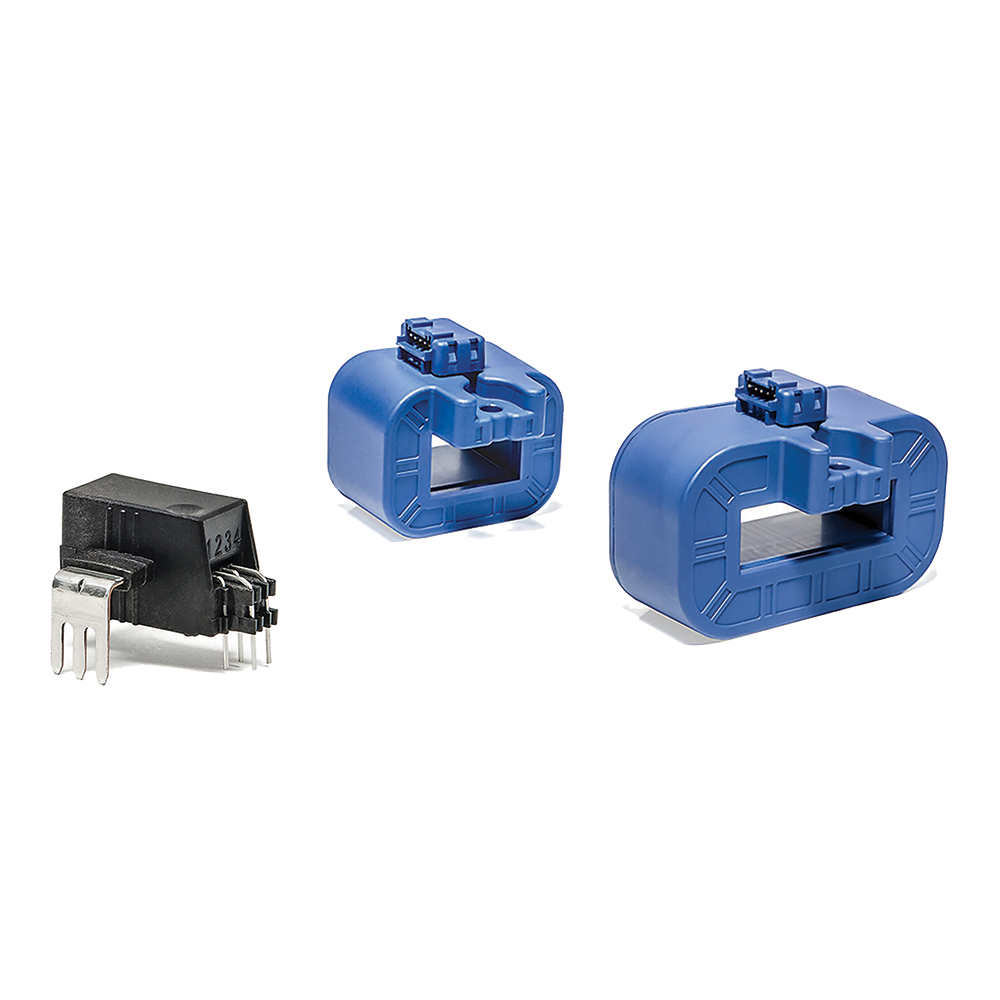 As power electronics systems get smaller, LEM is introducing three new families of compact open-loop current sensors which measure higher currents than earlier sensors of the same size, or similar currents with smaller size. Excellent performance is obtained using a single custom ASIC to perform all signal processing and analog correction functions. This article describes the sensors and their key electrical characteristics. It concludes with some application examples.

There are clear trends in current measurement today. For example, in UPS systems, and in power generation from renewable sources, the trend continues towards smaller physical size, higher current ranges, cost savings and quicker response times for faster switching frequencies. The simplicity of open-loop sensors makes them an attractive solution for attaining these objectives.

In this article, we present three new families of sensors that allow the nominal current to be as high as 800 Amps RMS and detection of an overcurrent up to seven times higher. The miniature HLSR xx/SP10 sensors are an extension of the existing HLSR family with an integrated primary conductor. They are mounted on a PCB and are the best choice if small physical size is important. The two other families, HOYS and HOYL (HOYx), are busbar mounted with new magnetic circuits optimized for weight and size. The open-loop HLSR and HO sensors introduced by LEM five years ago, meet the objectives of size, accuracy, speed and cost. However, the nominal primary current of the smaller HLSR is limited to about 50 Amps by saturation of the ferrite magnetic circuit (Reference 1).

Closed-loop sensors have often been used to meet the accuracy and speed requirements of high-current sensors. However, the secondary coil, which cancels the magnetic field from the measured current, adds to the device size, current consumption, complexity and cost. In high-current devices, the secondary must be driven from a high-supply voltage or complex electronics. A preferred approach is to use an open-loop architecture in which the imperfections inherent in an open-loop system are mastered by using a complex ASIC as the magnetically sensitive element. This technique was already used in earlier low-current sensors. Any errors of sensitivity or offset, including drift with temperature, are measured during the ASIC production test and then stored. The corrections needed are applied continuously when it is used, and most electrical parameters approach the level of the previous generation of closed-loop sensors.

Figure 1 shows one of the high-current HLSR xx/SP10 sensors. It has the same small physical dimensions and footprint as the existing family members, but the maximum nominal current is extended from 50 to 120 Amps by a new FeSi magnetic circuit. In all cases, the maximum current that can be measured is 2.5x the nominal current. The HLSR has an integrated primary and is mounted on a PCB. The four other connections to it are for the secondary side supply, the output voltage (VOUT) and a reference voltage (VREF). VOUT – VREF is proportional to the measured current. 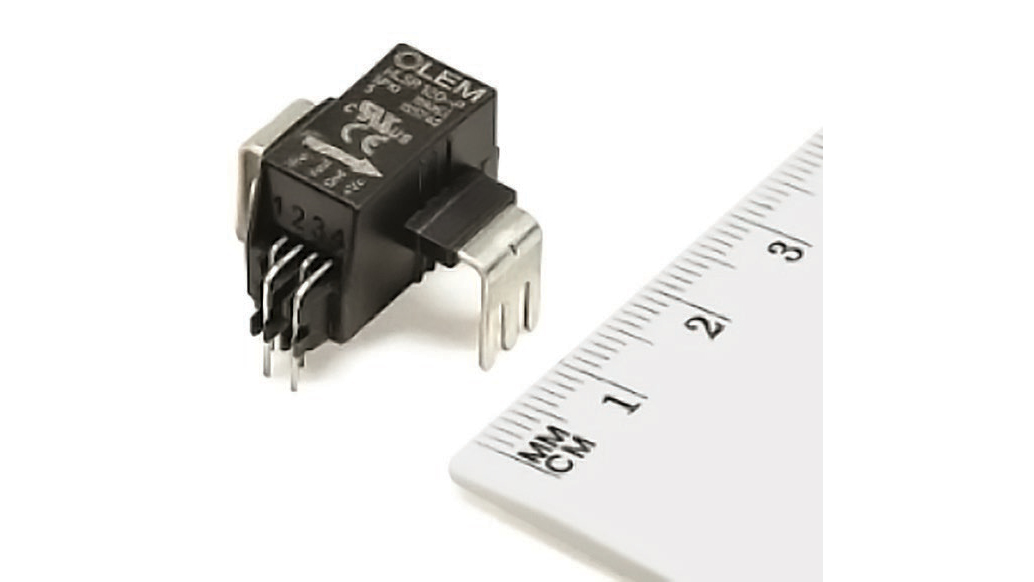 Figure 2 shows the new HOYS and HOYL sensors, which are respectively ‘small’ and ‘large’ devices for mounting on busbars up to 21 x 12 mm and 39 x 12 mm. Together, they cover the current range from 100 to 800 Amps — with a maximum measurable current of 2,000 Amps. These sensors have a fifth output pin, overcurrent detection, which shows that an overcurrent condition has been detected on the primary current. Their compact size is due to the optimization of the magnetic circuit and package around the busbar, and because there are no electronic components inside the sensors except the Hall effect ASIC and two decoupling capacitors. 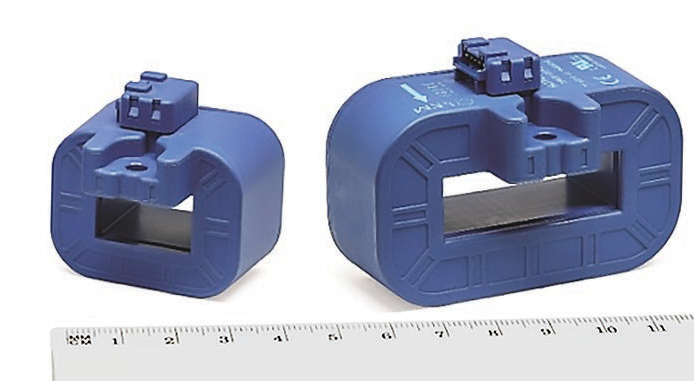 The supply for the measuring (secondary) side of the sensors is 3.3V or 5V, and the output is referenced to half that value generated by the sensor (although other reference voltage values may be forced from an external source). Apart from the variations in size and mounting arrangement, the differences in performance between the HLSR and HOY families are mainly due to their magnetic circuits.

In sensor applications, switching speeds are rising. Therefore, response times must be shorter so that unusually high current and short-circuit conditions can be quickly detected. In the new sensors, the CMOS ASIC contains Hall cells as the magnetically sensitive element — as well as all signal processing circuits. A high clock speed is used to give a fast response time, less than 3.5 µs, while filters minimize the noise at the sensor output by limiting the ASIC signal path bandwidth to that needed for passing the current waveform.

Two of the most important characteristics of high-current sensors are linearity, and when the primary is part of the sensor, thermal dissipation. A comprehensive series of simulations and tests have been performed to validate these aspects of the new sensors.

The capability of the HLSR xx/SP10 magnetic circuit was validated by building a test sensor with a I PN of 180 Amps — 50 percent above the highest production value — and measuring its linearity. The result for a current of I PM (+/-450 Amps) is shown in Figure 3a. The curve shows the difference between the measured output and a perfectly linear output. With a maximum of 0.5% of I PN, it demonstrates that the linearity specification for the series sensors is attained with good margin. It’s important to note that short current pulses were used for this test; 450 Amps is too high for a continuous current in the primary. 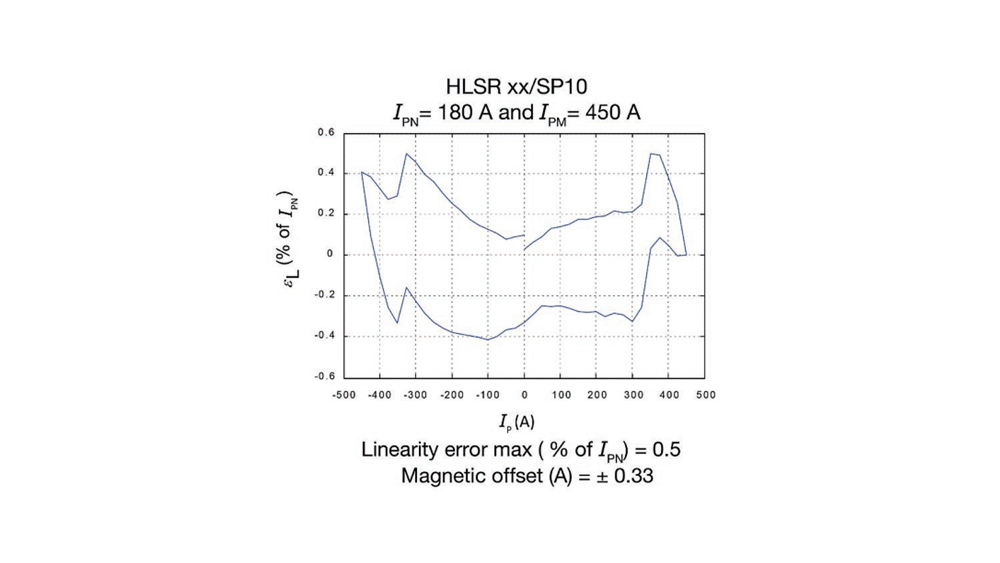 Figure 3a: Example of linearity & magnetic offset of an HLSR xx/SP10 sensor 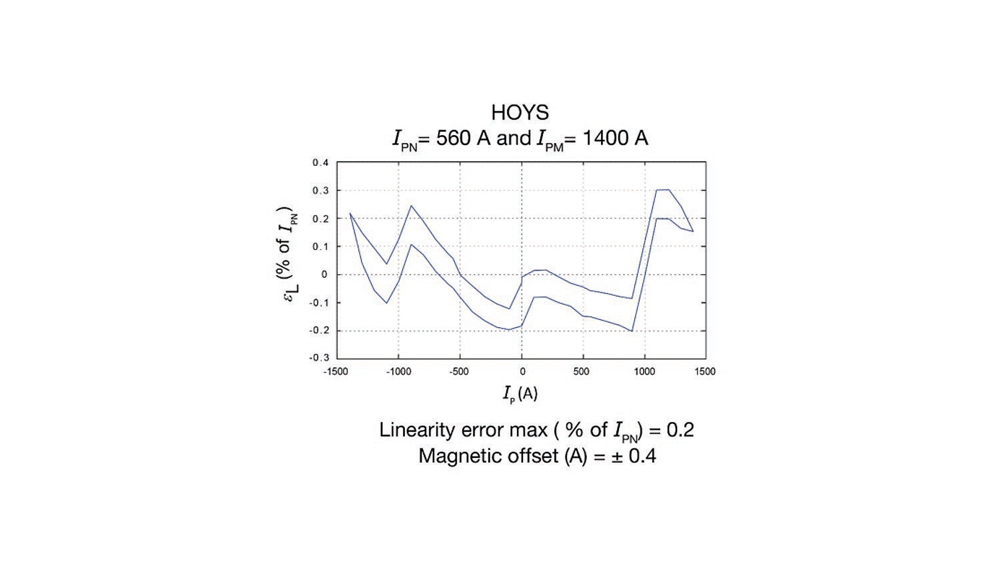 Figure 3b: Example of linearity & magnetic offset of an HOYS sensor 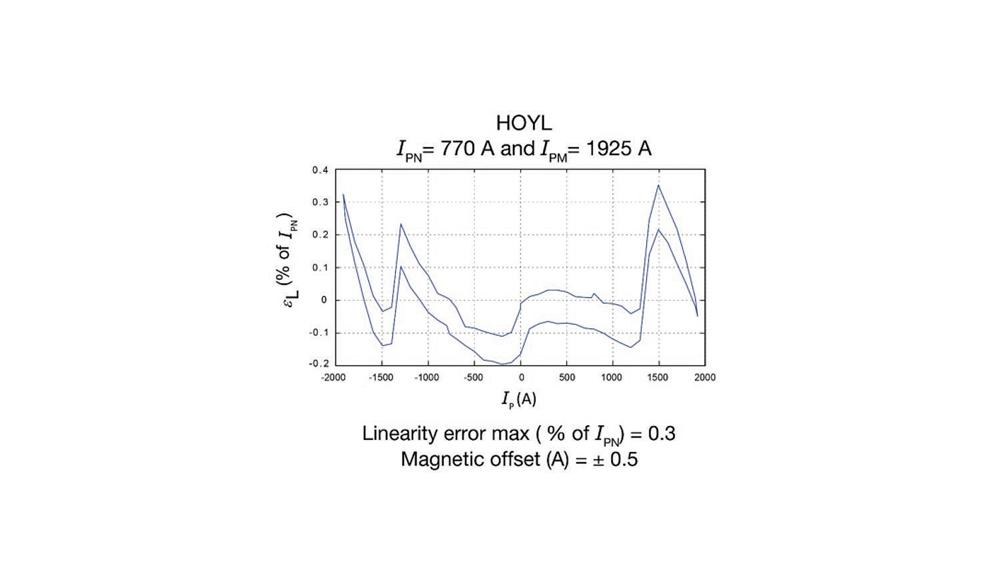 The capabilities of the HOYS and HOYL sensors are shown by their linearity in Figures 3b and 3c respectively. In these tests, the primary current covered the range +/- I PM , but the linearity error is expressed relative to I PN, a more demanding specification.

For the HLSR xx/SP10 sensor, whose primary is part of the device, it is important to know the thermal characteristics when a high current passes through it. Clearly, the sensor heating depends upon the PCB to which it is soldered, as well as the sensor itself. Today’s PCB technology allows for maximum currents of approximately 100 Amps. In the simulated example, all four layers of the PCB are used; its design and cooling by natural convection maintain the solder joints at 100 ºC in a 85 ºC environment. Figure 4 shows the results – only the sensor primary is shown. However, the simulation is situated as usual in the sensor housing. With a current of 120 Amps DC, the hottest part of the primary stabilizes at 113 ºC, just lower than the 120 ºC maximum allowed. 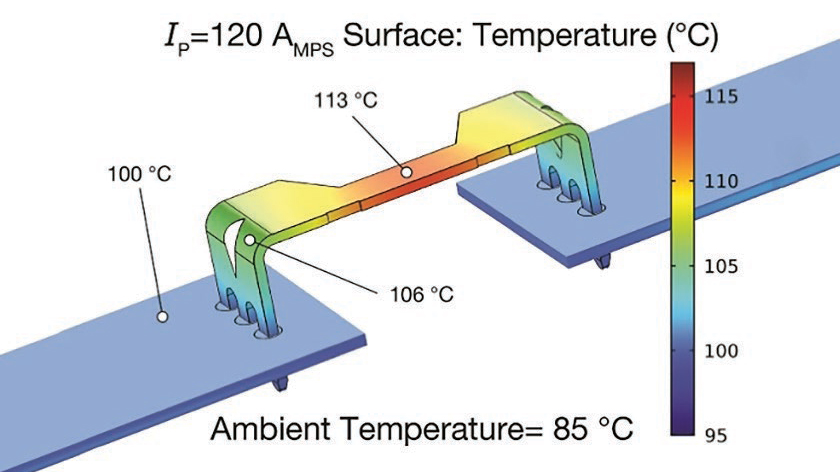 Figure 4: Thermal simulation of the primary of an HLSR xx/SP10 sensor

A particularly useful feature of the HOYx sensor family is overcurrent detection (OCD). The input used for OCD is taken before the sensor output amplifier and filters – see the simplified block diagram of Figure 5. This has two advantages: 1) the signal here is of lower amplitude, so a current level higher than that which saturates the sensor output can be detected; and 2) the OCD response time is faster than that at the output.

By default, the OCD threshold is set at 2.93x I PN, but 15 other multiples from 0.68x I PN to 7.06x I PN may be selected at the time of ordering the sensor. The exact multiples available are shown in the datasheets (Reference 2): In the most extreme case, an OCD level of 5,648 Amps may be chosen for the 800-Amp version of the HOYL sensor. Note that OCD levels are only accurate up to 10% or 20%, depending upon the level chosen. This is more than sufficient for the fast warning function that the OCD performs. 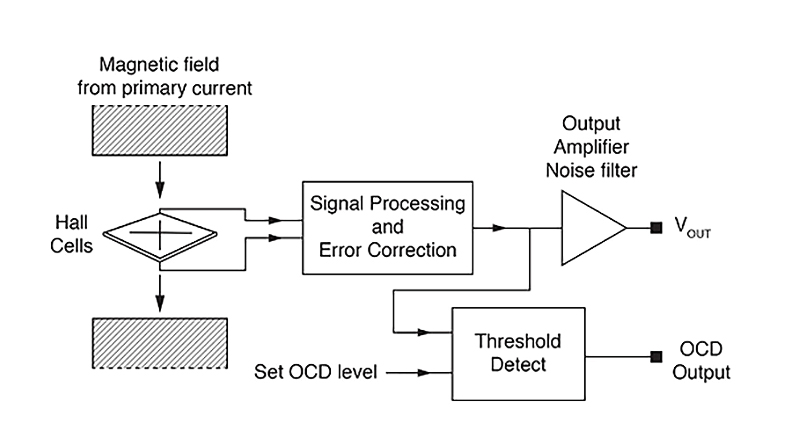 Figure 6 shows an example of the OCD output. The primary current (yellow) is ramped up above the level saturating the sensor output (red); 2.3 µs after the OCD threshold is crossed, its output (blue) falls to 0V. The OCD output is an open drain, which allows several to be connected to a single warning line. The spread of OCD response times is due to the primary current not being synchronized with the sensor clock. 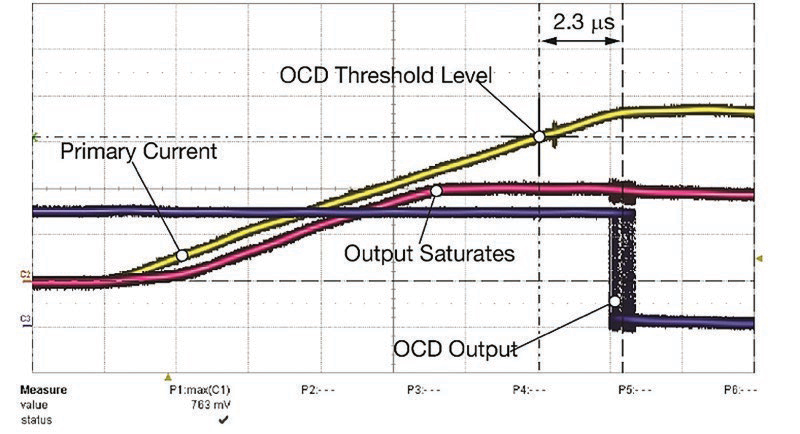 Figure 6: Current and sensor waveforms when the OCD is triggered

The new sensors have excellent isolation characteristics. In all of the HLSR and HOY sensors, there is full galvanic separation between the primary and secondary circuits. For example, the 1.2/50 µs ‘impulse withstand’ insulation test allows 8 kV with the HLSR sensors and 9.6 kV with the larger HOYL family.

Sensor reliability is another important consideration. The construction of open-loop current sensors is extremely simple, with only one active component – the Hall effect ASIC – and very few solder joints (none at all in the case of the HLSR family). The reliability of this sensor type is therefore excellent, with a FIT rate of 3.4 — corresponding to a MTTF of 294,170,980 hours.

Table 1 shows a summary of the principal electrical characteristics of the HLSR xx/SP10 and HOYx sensors. Complete details can be found in the product datasheets.

Uninterruptible Power Supplies (UPS) are being driven by two technology trends. Faster switching devices allow lower value reactive elements to be used; these are physically smaller so the electronics can all be PCB mounted. Current sensors also have to follow the same size trend, so as to avoid dominating the PCB surface. At the same time, higher currents can be passed by using many or all of the layers on multi-layer PCBs – some layers may be thick and dedicated to high current capacity. The HLSR xx/SP10 sensor is ideally situated at the intersection of small size, high current ranges and PCB mounting. Figure 7 shows a simplified application schematic in which HLSR xx/SP10 may be used in the control loop for the switches used both for AC to DC and DC to AC conversion. 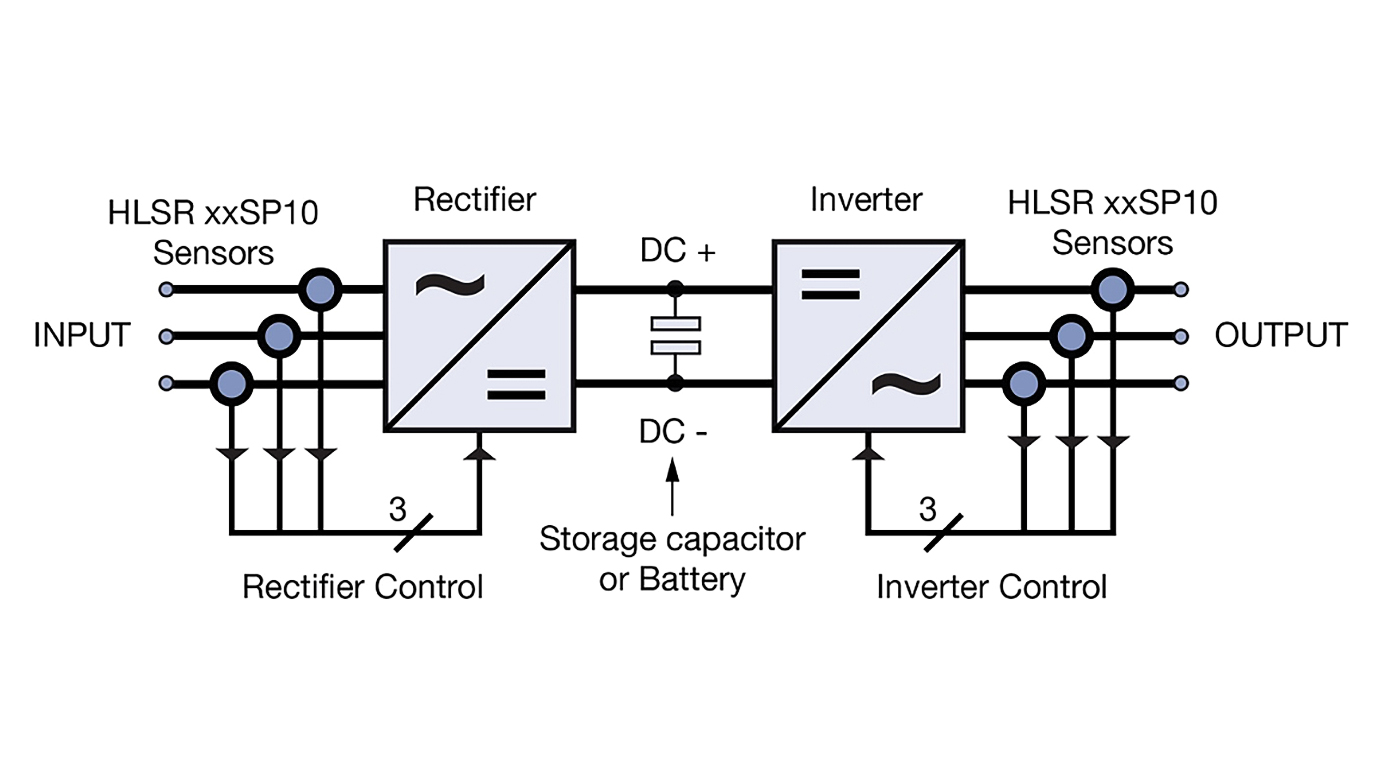 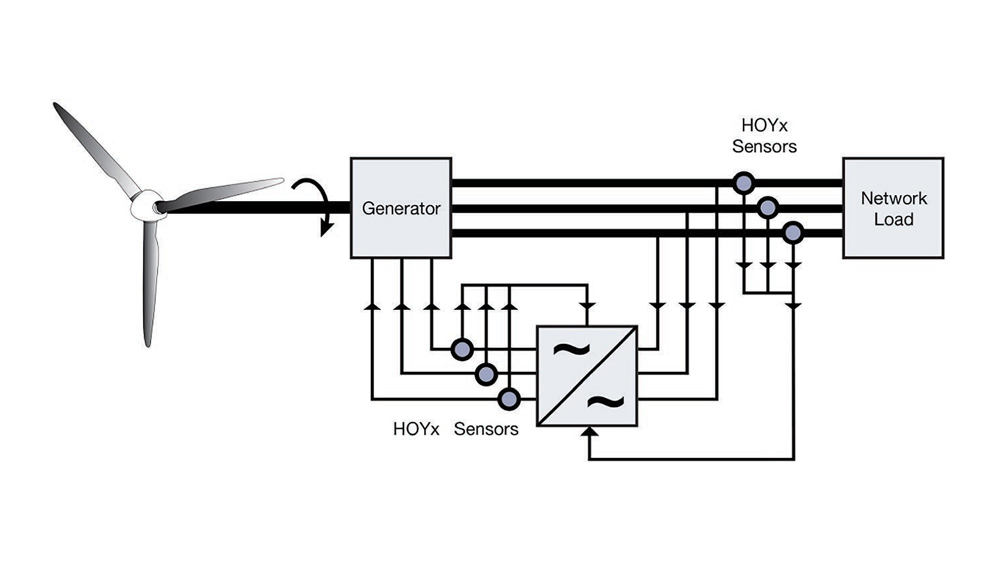 Figure 8: HOYx sensors in a wind turbine system with LVRT

In this application, the large current measuring range and the OCD feature of the HOYx sensors can be useful. The generator driven by a wind turbine may use power from the network it drives for its stator coils. See Figure 8. When mixed with AC current from the generator, the AC/ DC converter output creates the correct 50 Hz waveform for the powered network. If the network load draws too much current, power available for the generator may become insufficient, worsening the effect of the excessive load and, if there is no Low Voltage Ride-Through (LVRT) capability, the failure of one generator may propagate through the network and cause others to fail. Part of the LVRT solution is to detect overcurrent on the network side, where the large measuring range of the HOYx sensors is advantageous; the OCD feature is useful to decide different corrective actions and to confirm that current spikes have disappeared. The small physical size of the HOYx sensors makes them easy to deploy in these applications.

This article has introduced new sensors allowing currents of up to 2,000 Amps, to be measured using simple, low cost, open-loop architecture. In many cases, their performance will allow them to be used in place of more complex sensors. The compact size, low-supply voltage and OCD feature of the HOYx sensors will give designers new possibilities to implement efficient and economic systems.