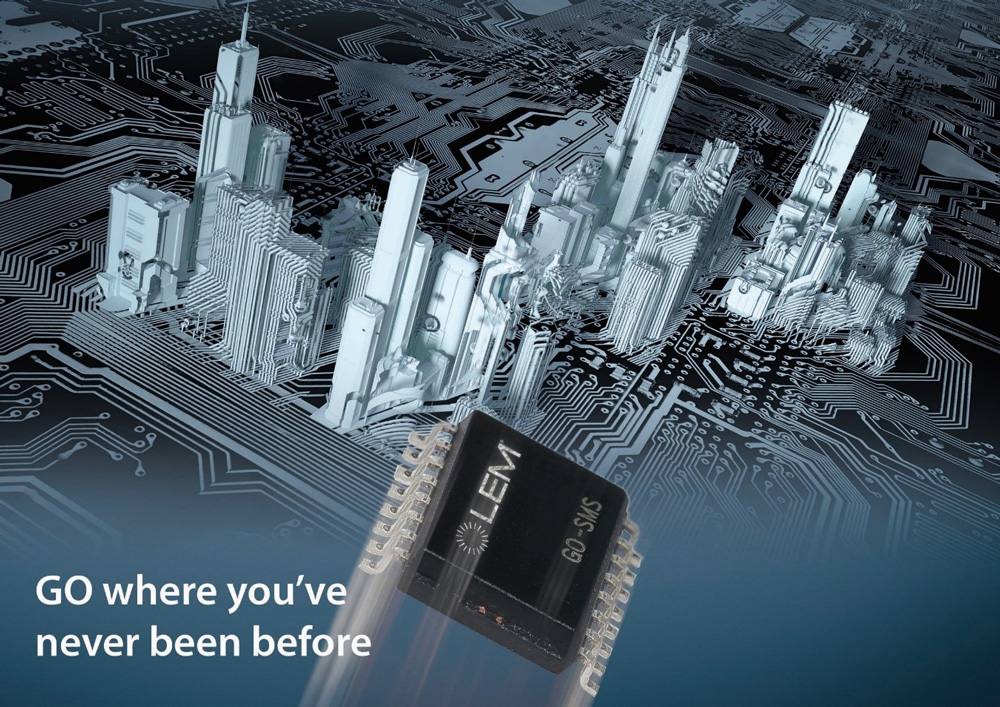 A New Family of Miniature, Fast and Accurate Transducers for Isolated Current Measurement

The design of isolated current transducers has been continuously driven by cost and size reduction. Continuing this trend, a new family of transducers needing no magnetic circuit has been introduced in standard small-outline integrated circuit packages. Careful design results in their accuracy being similar to those of conventional transducers with only a modest reduction in isolation voltage. Some extra features have been added.

Current transducers in which isolation is required generally detect the magnetic field of the measured current; this has the additional advantage of allowing both AC and DC currents to be measured. There have been two aspects to the trend in LEM open-loop current transducers in recent years: cost and size have been continuously reduced, and by using custom proprietary CMOS ASICs as the sensing element the performance parameters such as accuracy and response time approach those of more complex closed-loop transducers (Ref 1). Usually the ASIC is placed in the air gap of a small magnetic circuit which gives noise-free amplification of the field and screening from external interference. Most of LEM’s conventional open loop transducers measure currents in the range of 10 A to 100’s of A, isolation levels are up to 8 kV and the response time from 2 us.

Some applications, particularly for motor drives, have the same need for speed but are less demanding of the current range and isolation levels while having strong pressure on price. In applications such as for example white-goods, window shutters and air-conditioning low cost and small size are particularly important. For these cases LEM has now introduced an additional family of sensors, the “GO” family, whose size is reduced even further by eliminating the magnetic circuit. Instead, the primary current is passed directly into a standard integrated circuit package where its magnetic field is measured by a new ASIC derived from that used in conventional transducers. Figure 1 shows two such examples. One is in an SOIC-8 package and the 4 secondary-side pins are for the supplies, the output voltage Vout and a reference voltage Vref. The other is in an SOIC-16 package where 8 secondary pins are available so the opportunity has been taken to provide two different Over-Current Detect (OCD) warning levels; one very fast, and the other slower but more accurate. The speed and accuracy of the GO transducers are very similar to those of a transducer with a magnetic circuit. The absence of a magnetic circuit of course means that there is zero magnetic offset. 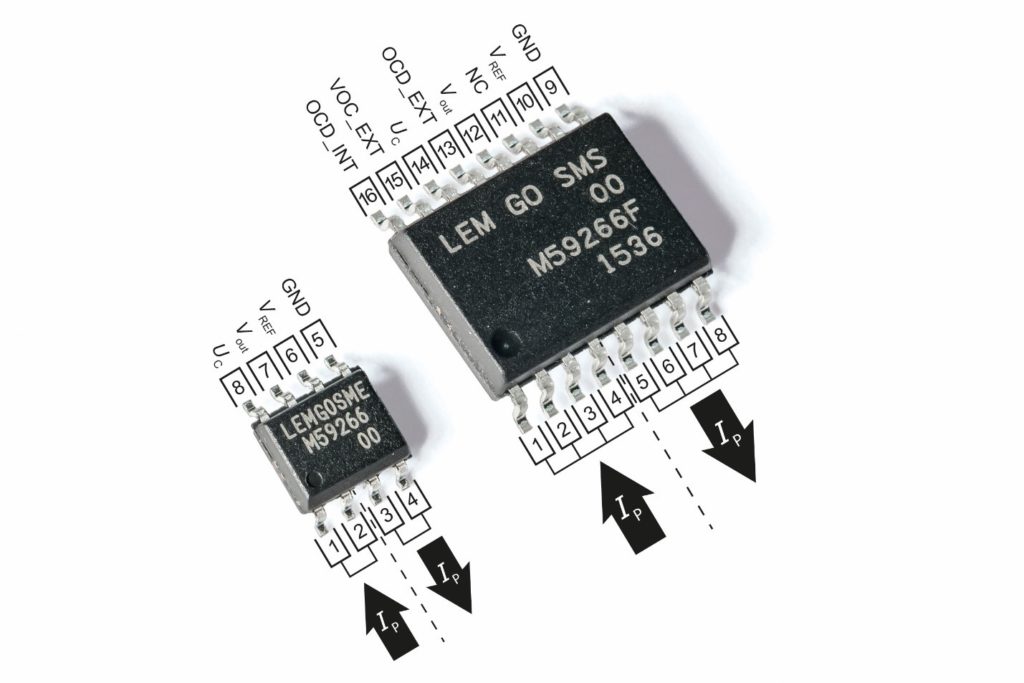 Figure 1: The GO series transducers and their pin connections in SOIC-8 and SOIC-16 packages. 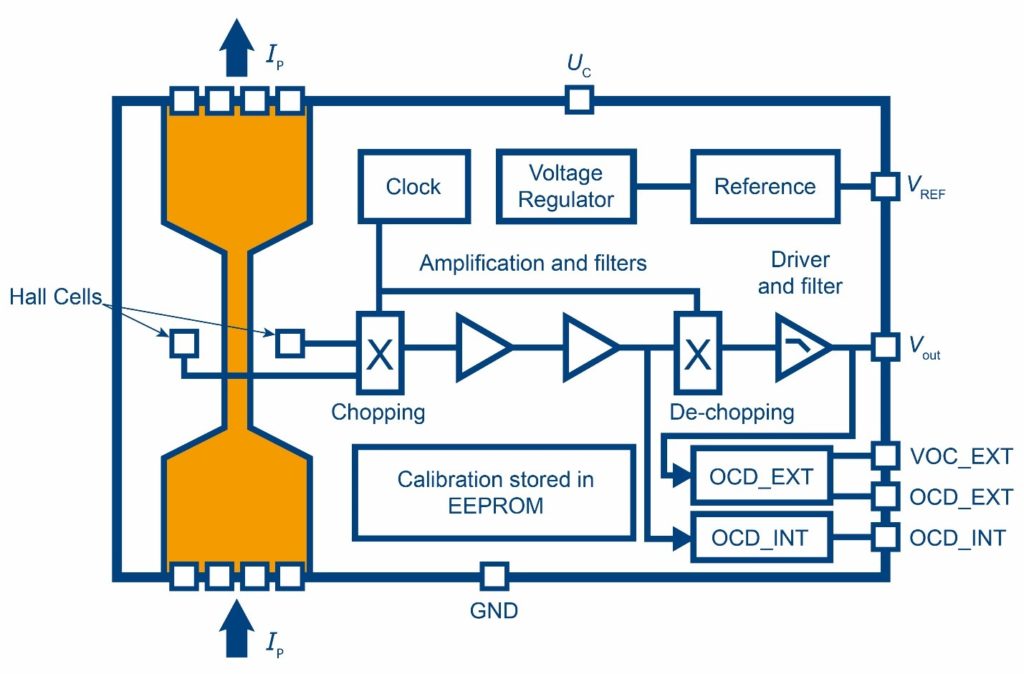 Figure 2: Block diagram of a GO transducer in an SOIC-16 package.

Figure 2 shows a simplified block diagram of a GO transducer in a 16-pin package. Multiple Hall cells implanted in the ASIC are placed on both sides of the primary current to detect its magnetic field. Their offset, together with that of the input amplifiers, is eliminated with chopping techniques which modulate the Hall cell output to an AC signal. After amplification the Hall signal is demodulated back to its original frequency before buffering and filtering at the output. The fast response time is achieved by using a high chopping frequency and internal filters which reduce the noise bandwidth of the system.

During production each transducer is individually calibrated. Tests are done at 3 temperatures; the drifts of sensitivity and output offset are measured and corrections stored in an EEPROM memory on the ASIC; this ensures that the transducer accuracy is maintained over temperature and aging. 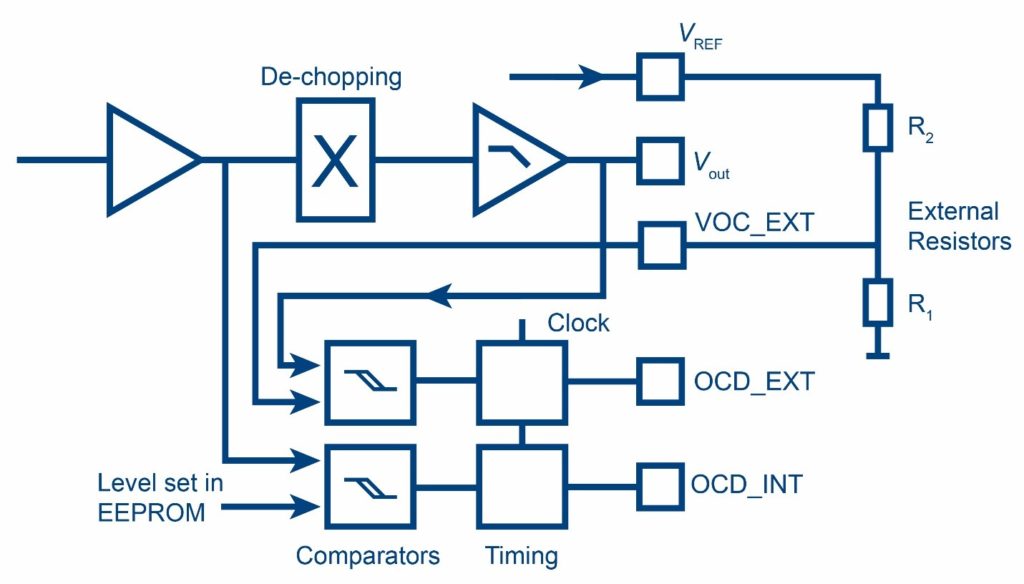 The detail of the OCD implementation is shown in figure 3. The aim is to give two different levels of warning. The first level is for currents slightly higher than expected, to warn for example that a drive current is going out of the expected range. This OCD needs to be reasonably accurate, not especially fast, and each user may want to set a different level. The relaxed speed requirement allows the input to this first OCD to be taken from the transducer output, and the level is set by user-chosen external resistors, hence its name, OCD_EXT.

The second level is intended to warn of currents which are dangerously high, due to a short circuit for example. The response time must be extremely fast, but the value and accuracy of the of the detection level are not critical. To obtain a fast response time and to allow an OCD level outside the normal linear operating range the input to the second OCD is taken before the demodulation block. Its level is set internally by storing a parameter internally in the EEPROM – so it is known as OCD_INT. The level is typically set at 3x the nominal primary current, IPN.

Figure 3 is slightly simplified: it omits the detail that ensures that both OCDs respond to both positive and negative over-currents.

Both OCDs check that the over-current condition is present for at least 1us approximately, to avoid false alarms, and both outputs, once triggered, are maintained for 10us to be sure that the condition can be detected. The outputs are open-drain, which conveniently allows OCDs from several transducers to be connected together. OCD_INT triggers in less than 2.1 us; the typical response time of OCD_EXT is 10 us.

The footprint of a GO series transducer in a 16-pin package is about 100 mm2, and in an 8-pin package it is half of this. The corresponding value for the smallest PCB-mounted transducer with a magnetic circuit is about 400 mm2. The heights are 2.5 mm and 12 mm respectively. However, for both types, in the higher current ranges some allowance must be made for dissipation of the heat generated in the transducer primary, which is greater in the GO series since the primary resistance is higher.

In Table 1 some of the key electrical parameters of the GO series transducers are presented. For comparison, the values of the same parameters for a small open-loop transducer with a magnetic circuit are also given – a small transducer has been chosen to give the most meaningful comparison, a larger transducer would have different parameter values.

Table 1: Comparison of key parameters of GO series and magnetic circuit based transducers.

Table 1 shows that many key electrical parameters have been inherited unchanged or slightly improved from the established sensors with a magnetic circuit, whereas others, such as size and insulation, are different, allowing the two transducer families to address quite different markets. 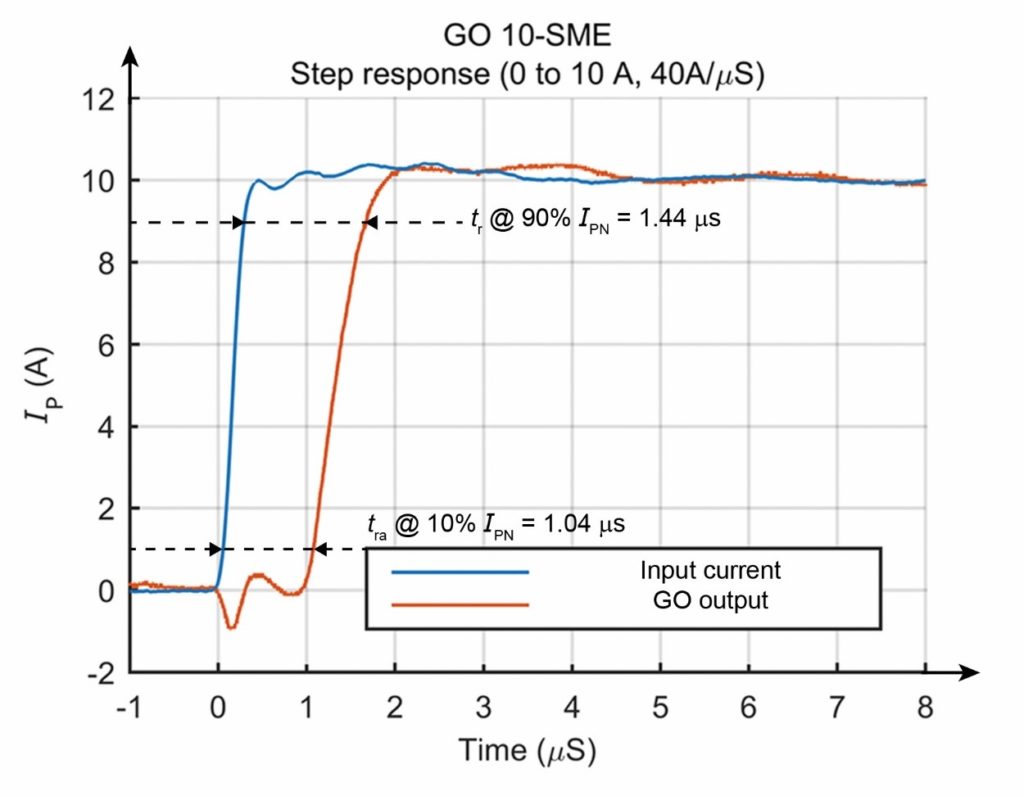 Figure 4 shows a measured response time after a primary current change in 0.3 us. The compact size and absence of magnetic components in the transducer gives a response with very little overshoot and ringing.

The assertion made previously that the GO transducers are not disturbed by external magnetic field will be true if the amplified electrical output of the Hall cells from both sides is the same, since the difference between the two outputs is used. To satisfy this condition:

(i) The sensitivity of the Hall cells on both sides of the primary (and the amplifiers to which they are connected) must be the same; that is, they must be well matched;

(ii) The magnetic field must be the same on both sides of the primary; it must be uniform.

Considering point (i), because the Hall cells and the amplifiers are made with large devices, their matching is excellent. When a uniform external magnetic field is applied to a GO transducer it is almost perfectly rejected.

Another important consideration in miniature transducers is the effect of a sudden primary voltage change on the transducer output. This is best handled at the ASIC level. Where internal signal levels are small they are always differential, and changes in their common mode level due to an external transient have little effect. Sensitive nodes can be protected by small grounded screens on the top metal layer. Screening is used only over the small areas where it is needed. This has many advantages over large screens: the top metal layer remains available for interconnect where screens are not needed; the ASIC die is not hidden and damaged parts can be analysed, and there are no Eddy currents which would slow the response time. 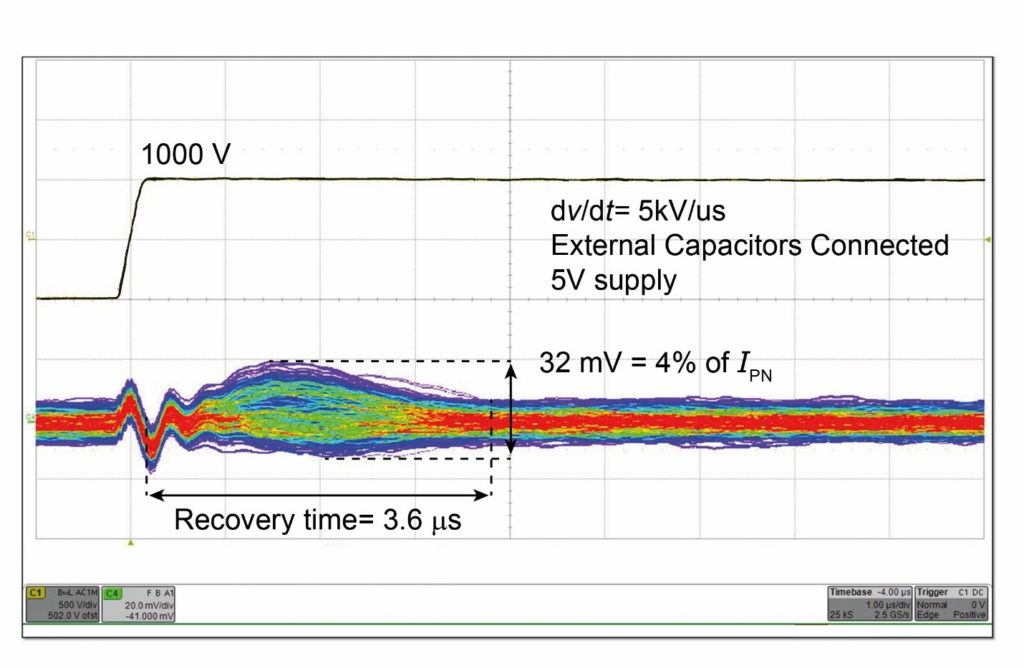 Figure 6. Response of a GO transducer (GO 25-SMS) after a dv/dt disturbance.

This paper has introduced a new series of miniature, fast and accurate transducers for isolated measurement of AC and DC currents. Some of their electrical parameters are similar to those of transducers with magnetic circuits and others are altered. Different transducers will be suited to different applications and the addition of this series to the LEM catalogue will extend system designers’ possibilities for optimizing their systems with the most efficient cost effective means of isolated current measurement.